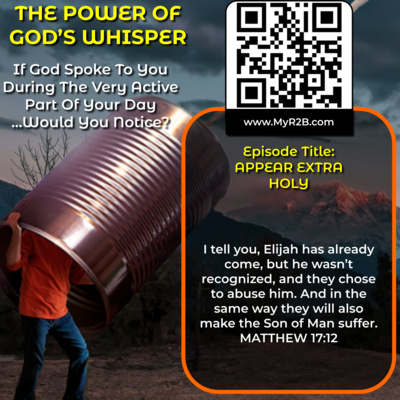 VERSE: I tell you, Elijah has already come, but he wasn’t recognized, and they chose to abuse him. And in the same way, they will also make the Son of Man suffer. MATTHEW 17:12

Many people believe that the prophetic gift of the Spirit is not at work in the church today. One of the reasons for the skepticism is that most believers look like normal human beings, not superspiritual prophets —as if a prophetic gift would make someone glow or appear extra holy. In the Bible, however, even the greatest prophets were flawed human beings. None was sinless. And most were rejected by plenty of people because they didn’t look particularly prophetic.

In 1 Samuel 16:7–12, God tells Samuel to go see Jesse and anoint one of his sons as king of Israel. When he arrives at Jesse’s house, he finds a group of seven strapping young men standing outside, ready to fight each other over who deserves to be chosen king over Israel. God tells him to “look at this one” (v. 6), but when Samuel looks at David he sees nothing special about him—just another kid with long hair and dirty feet who loves working with his hands (vv. 7–8).

The Bible describes many other prophets who looked just like ordinary people—with no glow or outstanding qualities—yet still had extraordinary gifts from God. Isaiah was known as “a man of unclean lips."

In Jesus’ day, John the Baptist was celebrated as a prophet by many, but he was also rejected by many others—especially the religious experts who were supposed to be close to God. In fact, Jesus criticized the religious leaders for not recognizing John as the “Elijah [who] has already come.” And Jesus knew He would suffer at their hands too. A great prophet and the Son of God Himself were rejected as genuine prophets by those whose religious grid didn’t allow for the presence of prophets in their midst. And a generation missed the time of its visitation by God.

Jesus knew this would happen, and He prepared His disciples for it by teaching them that they must become like children in order to enter into His kingdom (Mark 10:15). Children are open to learning from anyone who speaks with authority; they don’t need credentials or degrees before they will obey; they don’t question what is said or how it is said; they simply obey. They are willing to let themselves be taught because they know there is something greater than themselves pulling their strings and that someone else should have first dibs on determining what is true and right.

In a world where the supernatural is dismissed, we too often ignore the possibility that God could be speaking. But here’s the thing: God has spoken, and He still speaks today.

What are we to do? Open ourselves up to the possibilities. Allow the Spirit to speak through His people. And listen as if we may be hearing the very words of God.

Lord, what does a prophetic word sound like? How can I know it’s You? Teach me to be discerning without being skeptical, to be open without being gullible, and to listen to anyone through whom You might be speaking. Open my ears to Your voice —whatever it sounds like.