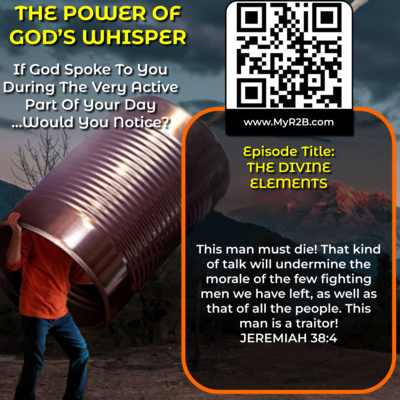 THE POWER OF GOD'S WHISPER

VERSE: This man must die! That kind of talk will undermine the morale of the few fighting men we have left, as well as that of all the people. This man is a traitor! JEREMIAH 38:4

TAKEAWAY: He'll leave an imprint on your heart that will never go away, no matter how long you live or how many things happen in your life. You'll know it when He speaks because He'll speak with His own voice, not through someone else's words—you'll hear Him loud and clear!

The prophet Jeremiah was a man of God.

It is difficult to discern the voice of God through the voice of a man. The words that Jeremiah spoke were not his own—they were the words of God. Yet, when he spoke to them, people did not believe him. They thought he was being negative and speaking from his own fears and biases. So they refused to listen to him and made him suffer.

When God wanted to speak, He chose people. He didn't just throw a message out into the world and hope it landed somewhere. He chose human beings to be His messengers and then went about the work of training them to speak His words so that when they opened their mouths, people would know God was speaking.

It wasn't easy—not for them or for us. When we hear a word from God today, we're just as likely to reject it because of its source as accepting it because of its content. We're just as likely to believe that anyone who speaks in the name of God is doing so correctly and accurately as we are to believe that any who claim such a thing are false prophets. And yet despite all this… despite our imperfections… despite the fact that we can so easily mishear Him… despite all these things… God continues to speak through human beings today!

We all want to hear from God. We will do almost anything to try to get His attention, and we will do even more to make sure that what we hear is actually Him.

I believe that it's possible for us to hear God speak.

I believe that we all can if we want to.

But I don't think it's always easy.

I don't think it's something you'll get right away, either. It takes practice, and a willingness to try something different than what you've done before—and maybe even something totally new. But when you do have an experience with God, there's no mistaking it: He'll leave an imprint on your heart that will never go away, no matter how long you live or how many things happen in your life. You'll know it when He speaks because He'll speak with His own voice, not through someone else's words—you'll hear Him loud and clear!

Lord, forgive me if I’ve been too critical of any of Your servants who speak Your words. Give me an open heart with true discernment. Let me hear Your voice, even when it comes through someone just like me.